2018 saw The Chesterfield Band hit the road in a big way – Travelling over 15,000km, playing over 100 shows, eating an absolutely ridiculous amount of bacon and egg rolls while meeting a heap of amazing people.

Their debut single “Imagining Nothing At All” continues to be featured on Tiger Airway flights around Australia and their single ‘Home’ is receiving airplay on international radio stations.

2019 is shaping up to be even bigger with plans for another Australian tour and a European tour in the works.  The band released their debut EP “Early Days” in February with four tracks and a whole bag of goodies.

“With their deeply infectious vocal melodies and rich instrumentation, their music will wrap itself around you like a warm blanket.”

The Chesterfield Band started in the kitchen with a daughter and her Dad, Tess and Cam writing and singing together.

They won an original song contest and released their first single under the band name “My Dad & I”.

Six months and a whole heap of shows later the duo formed into a four piece Indie band with Dylan on drums and Craig on bass.  The band has toured non-stop and just can’t get enough!

Tell us how you develop your sound and style to make it different from other musicians.

We write our music not to be different but to be a true reflection of our experiences and feelings.

It often starts with an idea that Tess (my daughter) comes up with or myself.  We then play it out and feel out its edges, fill it in so to speak. It means we each bring a different voice to the same feeling and the song seems to form.

Tell us your opinion on the way new artists are coming up and the frequent release of songs.

I think the industry is running at a fast pace and artists have to be more and more versatile.  Constant releases keep them fresh and talked about (hopefully).

Tell us your experience as a musician.

The band has been together for one and a half years as a four piece. Tess and I have played together as a duo for three years prior to this.

Collectively we have over twenty five years’ experience in the industry having played around the world, written for other artists and also been signed as a writer to Warner Chappell music.

Tell us your opinion on streaming and digital download of songs.

It’s hard as a professional artist to financially realize a return on your music due to these platforms.

Performing and merchandise is the only real way to make money.  That said the platforms allow you to be heard by so many more people!

Tell us your goals and plans.

We want to be playing festival stages around the world and touring our music everywhere!

We have a new EP to record and release this year as well as a European tour in June / July.

Tell us five current artists that are your favourite.

Tell us your best song up to date and share the link.

Tell us your dream and hope for the future.

To make our living from our music and to make people happy!

Tell us what has changed in the music industry.

The idea of an album I think is not what it once was and playlists or compilation albums are now the modern way of listening to music. This means I think that as artists we can be more diverse in our genres.

Tell us your opinion on television / radio stations playing the same songs from established artists and giving little chances to independent artists.

Sad but true and difficult to break the mould – That said there are many radio stations that only play independent artists.  I think more promotion around new music would benefit these things.

Tell us the challenges independent artists are facing and how to tackle it.

Making money from selling your music is now really difficult. This makes it hard to keep playing and writing and just being a musician.

Tell us your opinion on using social media to promote music online.

It can be really effective at times and not at others.  I think the continually changing algorithms make it difficult but it does work too!

Tell us about your music career.

We have played shows all over Australia, had our music played on national airlines and also many radio stations. It’s been a fabulous journey.

Sharing the stage with your own daughter is amazing and the band itself is really just a big blended family!

Tell us what still motivates you to go on with your music career.

Music is our expression, our joy…it’s what we all just need, like air.

Tell us about you as a person.

As a band we are like a blended family. Two of us are family and the other two well we’re all like brothers.

Elaborate on the story behind the song.

The song that stands out the most to us is ‘Standing Still’.  It was written when CC was feeling depressed and alone and life was not going well.

He tells the story of him picking up his guitar and playing the opening riff and realizing that while life was not great at least he was standing and that was the start of his recovery.

Tell us the process involved in making this song.

Started as a riff from a feeling and the words just flowed out – The song was played in a different key to start and was sung by CC Hall.

Once Tess heard it, she took the lyric and melody and made it the beautiful song it is now.

The Chesterfield Band – Previously My Dad & I based on the father and daughter duo of Cam & Tess.

They met Dylan the drummer at a festival and Craig was playing their first tour as a band and things have just grown from there.

‘Early Days’ – We named it that because the songs we recorded were the first songs we played in our early days as a band and as a father and daughter writing.

Recorded in the summer humidity at the mouth of the Mississippi, ‘Clock-Work’ bristles and fizzes with jangling Big Band swing-pop and hints towards a new creative peak with a heavy New Orleans influence.

Calling on the iconic Preservation Hall Jazz Band to provide brass, Bedouin tap into the flamboyant tradition of brass band parades and the result is a horn-heavy, jazz-inspired track that draws from its historic surroundings.

Almost a decade on from the release of the 2010 album ‘Light The Horizon’, the band have been busy in the studio once more after a period where it wasn’t clear whether they would record any music together again.

“One morning I was sitting at the piano in my house and “Clock-Work” came to me,” says lead singer Jay Malinowski talking about the new single. “I thought this is something new, I think it’s a Bedouin song – I put it on a break-beat and sampled these horns from an old big band swing record and sent it off to Eon.”

Eon adds, “Jay sent me a demo and it hit me right away. The use of the breakbeat, the piano, and the horns – It still felt like Bedouin with the subtle off-beat piano but was fresh.”

The single is taken from the band’s fifth album, set for release later this year. Drawing on a wide range of influences that include New Orleans jazz, ska / reggae, electronica, pop and rock, it shows not only the eclectic post-punk-world-beat tendencies of Bedouin Soundclash but also the cities that surrounded them.

Spanning two communities, the album was recorded in New Orleans with the Preservation Hall Jazz Band and in Vancouver at the St. James Church with the children of the St. James Music Academy…

Bedouin Soundclash have toured all over the world and have shared the stage with the likes of No Doubt, Ben Harper, Damian Marley, The Roots, The Interrupters, Gogol Bordello, Bad Brains, and Thievery Corporation among many others. 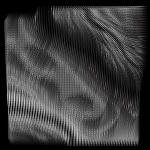 Leeds based singer / songwriter Imi has released her brand new EP, consisting of three intense and retrocentic tracks that perfectly encapsulate the lush and gloriously produced future-pop she masterfully intertwines with dark atmospherics.

Imi creates a dream-like world utilizing the best of synth-wave soundscapes with a twist of modern performance art and an astoundingly powerful vocal.

Opener ‘The Fence’ recalls ‘Travelogue’ era Human League or Kraftwerk with the ethereal voice of Kate Bush while ‘I Feel Alright’ ventures further deeper into the foreboding. The unforgettable ‘Margins’ puts Imi centre stage with a backing of driving drum machines, delicate keys and a pulsating rhythm.

“Lines was inspired by Jim Jarmusch’s film ‘Paterson’” Imi tells us, “which observes the structured monotony of life, and how we squeeze joy from our passions at every liberating opportunity.

The film offers a charmingly modest perception of this, but at the time it provoked some deepening frustrations at the limited prospects for myself and so many creatives.

‘Margins’ explores the peak of these frustrations, offering a mocking account of my past constraints, but over time my thoughts on this have evolved. While my ambition for change hasn’t faltered, my perspective has matured in a way that is more accepting and is able to find happiness in the everyday.

This is celebrated in ‘I Feel Alright’ which was a real breakthrough for me personally.

‘The Fence’ is the mediating balance between these two sides, and is essentially the decision you make to take control of your life and start taking responsibility for your own misfortunes or happiness.”

After self-releasing her debut single ‘Born For What?’ in December 2017, Imi made her first live appearance on BBC Music Introducing and received support from Steve Lamacq’s show on BBC Radio 6 Music.

2018 saw her support the likes of Let’s Eat Grandma and Ghostpoet and perform her first festival slot at Tramlines in Sheﬃeld.