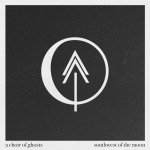 A Choir Of Ghosts – Southwest of the Moon

Artist – A Choir Of Ghosts

Song Title – Southwest of the Moon

Having grown through the soil that is the reminiscence of Kurt Cobain, topped with water, sun, and air of Tallest Man On Earth and Hollow Coves, A Choir Of Ghosts new single gives you all shades of nostalgia in the single “Southwest of the Moon.”

The single is inspired by a painting displayed in his childhood home and naturally developed into a reflection of past relationships and friendships.

It resonates how we can break relationships when asking for too much, giving too little and being silent when being mistreated, in hope of you will “come back home”.

“Southwest of The Moon” is a letter of apology, both to himself to be stronger and an asking of forgiveness for the people that have got hurt.

Tell us your names, country of birth and childhood experience.

James Auger, born in England and grew up in a small fishing village on the northeast coast of England.

Elaborate on your music career, band name, experience, and skills.

My music career started when I was 12, like every other aspiring musician playing in my friend’s garage and playing way too loud.

I started playing more folk/pop music when I became 20. A Choir of Ghosts is an accumulation of all of my old bands that are now dead and buried but have helped create the musician I am today.

Tell us your genre and idea behind your music video or song.

I guess my genre would be classed as folk-pop. The idea behind Southwest of the Moon is basically an apology to people I’ve hurt in the past, people who I don’t have contact with anymore for whatever reason.

Tell us how to run a record label based on your experience as an artist.

If I were to run a record; I would want to be as involved as possible, but I won’t try and force my ideas on the artist. I would always try and be available if artists have questions or worries.

Tell us how you are promoting your music.

I am signed to Greywood Records in Germany and they are promoting my music.

State the names of other members of your band, music producer, crew or music video director.

The members of my band change a lot, we’re a musical collective. I have members from both Sweden and Canada.

My music producer is a guy from Napanee, Ontario called Terry Benn; I’ve been working with him for the last three years.

Tell us how long you have been in the music business, your experience, and your future goal.

I’ve been playing music since I was a child, but only in the past three years have I started touring extensively in Europe.

Tell us what makes you unique from others.

In a way, I’m not unique at all. I’m just another guy with a beard playing acoustic guitar and singing about love.

But what sets me apart, and what sets everyone else apart is the music itself. The experiences and stories leading up to the creation of the song are unique to everyone.

I Was Just Thinking – Teitur

The Art of American Football – Funeral For a Friend

The Science of Selling Yourself Short – Less Than Jake

Tell us your position on “Do It Yourself” and signing to a major label.

Well, there’s a big difference. Promotion is obviously a lot easier if you’re signed to a major label, but at the same time, there is a lot more artistic freedom if you’re just doing it yourself.

I have a couple of friends that have signed major deals and sometimes it doesn’t go that well because they have so many artists and they don’t get the attention they deserve or need to prosper.

Tell us other activities you are pursuing apart from music.

I am planning on studying to become a teacher actually.

A Choir of Ghosts is all the bands I have been in previously and that those bands and projects have shaped the musician I am. The ghosts are those bands – the choir is all of them put together.

‘Southwest of The Moon’ comes from a painting at my mother’s house, an old tapestry style painting and on it, it says that something lies southwest of the moon, and I thought it sounded beautiful.

The album is going to be called “Ounce of Gold”. It’s the title track of the album, and a song I wrote when I was 18.

It is about trying to weigh up the difference in happiness and money.