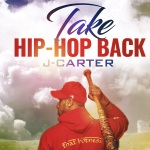 Song Title:  Out the Door

J-Carter comes straight out of New Jersey with a surgical type of flow that cuts through the soul.

He started his musical journey writing lyrics at 13. A cartel of hip-hop artists that have come on the music scene in the past thirty years motivated him into developing his musical style.

His music is an amalgam of old school feel mixed in with the new contemporary feel of hip-hop, but he strives to maintain his own style and voice to distinguish him from the playing field.

Wasting no time, J-Carter is back with his third album ‘Take Hip-hop Back’ within a year.

J-Carter states” This time around the people will have no choice but to hear me.”

Critics have criticized him about sounding too old school, not having any trap music, club bangers, and that he should not even be making music at all.

With his new album, he plans to silence the critics and leave no room for uncertainty about his lyrical skills while leaving his mark in this hip-hop game.

With 38 tracks spread across this album, there is nothing lacking to quench the thirst of the real hip-hop heads looking for that lyricism and realness in the game.

‘Take Hip-hop Back’ is an album that balances that traditional lyricism with a contemporary outer shell.

‘Take Hip-hop Back’ is the album J-Carter believes will leave a mark on the music world and bring a sound and lyrical aim in this genre for the first time.