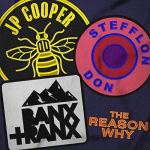 JP Cooper – The Reason Why

Song Title:  The Reason Why

JP Cooper teams up with Stefflon Don and Banx & Ranx to uncover a brand-new video for ‘The Reason Why.’

JP Cooper thrills with his raw vocals while Stefflon Don seconded with her soulful vocals.

The video is top-notched, and the lighting is excellent.

JP Cooper stirs as he sings from the heart.

The lyrics of the song are rich.

It’s often said that today’s musicians don’t “pay their dues” in the way previous generations did, whether it was the Beatles’ residencies at the Star Club in Hamburg or David Bowie hauling himself around clubs for years.

However, JP Cooper has done all this and much more. He may now be scoring multi-platinum hits and collaborating with the likes of Stormzy.

However, He’s been the guy standing outside a venue, handing out flyers for his music and tracks on burned CDs.

He’s humped gear into the back of his Dad’s Nissan Micra to drive two hundred miles to play for twenty people, a sound engineer, and his dog.

JP’s songs are built on his values – positivity, empathy, and soul – and 80 + of them have been whittled down to 13 for his debut album, Raised Under Grey Skies, which has been inspired by his life and times.

Good Friend, for example, draws on the times when he was first signed and was “uprooted” away from family and his son. “I think labels should have a psychologist to hand,” he chuckles. “It sounds like first world problems but it’s hard, and you really find out who your friends are.”

Colourful scenes enhance the video of ‘Mama’ while the lighting is magnificent.

The audience will be enticed by the eye-catching choreography while the production is top-notch.

Vocals are compelling while the instrumentation is driving.

‘Mama’ is a beautiful song to watch!

By the age of 19, the powerfully voiced, BRIT School-educated Ella Eyre had already been featured on a U.K. number one single.

“Waiting All Night” combined an intense performance from Eyre with the inventive production skills of fellow Londoners Rudimental. Issued to coincide with the drum’n’bass act’s debut album Home – also an instant number one record – the success of both releases was reinforced by Eyre’s involvement in a spring 2013 Rudimental U.K. tour.

While “Waiting All Night” wasn’t her first appearance on record, it raised Eyre’s profile and also helped to vindicate Universal’s decision to sign her to their newly established Virgin EMI label. Those who were in anticipation of her debut solo material in the meantime sought out Other People’s Heartache, Pt. 2; a 2012 download-only mixtape by rising London alt-rock act Bastille that featured Eyre on two tracks: “No Angels” and “Free.”

By the end of the year, Eyre had finished work on her debut full-length Feline, featuring an array of producers (Ilya, DJ Fresh, Sigma, Sigala). The album appeared in February 2015, peaking at number four in the British chart; soon after, the single “Together” became her third Top 20 hit in less than a year. A 2017 collaborative single with Sigala called “We Came Here for Love” arrived in early 2017, reaching number six on the U.K. charts. “Ego” later followed which featured Ty Dolla $ign.

Also in 2017, Eyre took part on the Artists for Grenfell charity recording of “Bridge Over Troubled Water.”