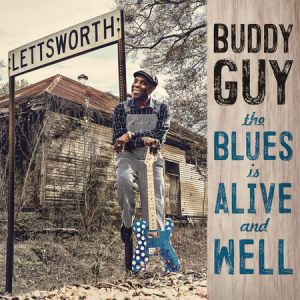 The press have been raving about the new tracks released thus far. Rolling Stone called the first track out “Nine Below Zero,” “searing” and “masterful” and declared “Buddy Guy proves blues is alive and well” and Guitar World wrote “scintillating” and “powerful.”   Of the second song released, ‘Blue No More’ featuring James Bay, Billboard described it as a “soulful slow-jam,” and Rolling Stone noted “…Bay knows he’s singing in the company of musical royalty, so he pushes his voice as hard as he can, exploring the rougher edges of his register. Buddy Guy is 81, but he shows no signs of decreasing productivity.”

Last week, Buddy released ‘Cognac’ featuring Jeff Beck & Keith Richards to continued raves. In their review, Rolling Stone writes “the five-minute six-string showcase doubles as a bluesy drinking session between the trio of ‘Rolling Stone’s 100 Greatest Guitarists’ as Guy howls about women, the past and one late bluesman who was a drinking buddy.” Guitar World calls ‘Cognac’ “the trio’s wonderful concoction” and Grammy.com writes it’s “a spell-binding dip into the blues.”

THE BLUES IS ALIVE AND WELL is the follow up to Guy’s 2015 critically acclaimed album BORN TO PLAY GUITAR, which debuted at #1 on Billboard’s Top Blues Album charts. The album marked Guy’s fifth #1 album on the chart and twelfth Top 10 Billboard Blues album.

It was previously announced that Buddy Guy will be the recipient of The Americana Music Association Lifetime Achievement Award on September 12 at Nashville’s Ryman Auditorium.

In his quest to keep the genre vital, Guy recently spoke about the origin of southern blues and performed on David Letterman’s Netflix series, My Next Guest Needs No Introduction.