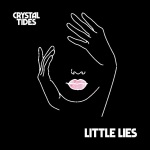 Harry Knowles, lead guitar, Sam Pennington, drums, Billy Gregory, vocals, and George Regan, bass, came together in a small flat in Brighton where Billy and Harry wrote songs on their breaks from lectures at university.

When lifelong friends Sam and George joined in it felt like they’d all been playing together for years already.

A manic DIY debut tour took them around the UK in a swirling mess of glitter, late nights and exuberance.

They recorded a demo that connected with their fledgling young fan base.

The band was invited to perform at Etihad Stadium for the Champions League semifinal.

‘Little Lies’ tells the story of all the mornings we have woken up not knowing where we are, how we got there and the big one of ‘What the hell happened last night?’

We’ve all been there!

And even though the hangover is killing you, it comes to the next evening and all you want to do is go out and do it all again.

We chose the title ‘Little Lies’ because of two things really…

Firstly, all those little lies you tell yourself when you are hung-over, just to try and make yourself feel better!

You know like ‘I didn’t even drink that much’ or ‘I’m never drinking again!’

And secondly, all the little lies that spread around about what happened on your drunken night out… those things that everybody talks about but nobody truly knows what happened.

Have a listen to our new single! We guarantee you’ll love it!

Tell us your most memorable live performance.

We were lucky enough to play at the Etihad Stadium ahead of the Champions League semifinals in 2018. Doesn’t get much better than that!

Discuss how you build your song.

One of us usually comes up with an idea and brings it to the band – We then sit down and mix all of our own little ideas into it and go from there.

Tell us how you impress your fans with your music.

We try and make it catchy and instantly memorable. We want people to hear our music and have it resonate with them!

Tell us what you will do apart from music.

Hopefully nothing! Music is the end goal and we don’t want to settle for anything less!

Tell us the piece of advice you will give to a new artist on entering the music chart.

Don’t give up. If you enjoy playing music and releasing it and it makes you happy but it doesn’t go the way you want it too, stick with it.

Aiming for major radio coverage and perhaps a tour around the UK! Watch this space.

Tell us the most difficult part of the recording.

Deciding if what you have already is good enough and having the open mind to change it.

Discuss the greatest mistake you have ever made in your music career.

Too many to mention, but mistakes only make us better.