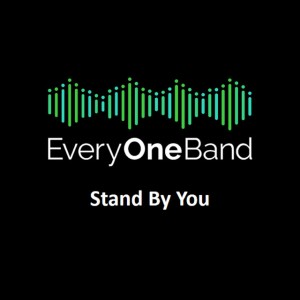 With over 2,000 musicians on the recording, Stand By You is powered by over 240 drummers, percussionists and bass players; over 260 guitarists (led by Ian Moss, Martin Rotsey, Diesel, Jack Moffitt, Johnny Took, Dave Leslie, Brendan Gallagher and Murray Cook). There’s a 66 piece string section (including the Sydney Symphony Orchestra), and Wiggle Jeff Fatt led the 70+ strong piano and keyboard cohort.

The HUGS, BUMS and Blue MUGS were just a few of the ukulele groups to submit their parts, creating the EveryOneBand Uke Union of over 660! And there were over 200 other recordings of every instrument imaginable – even bagpipes from Anthony Field!

EveryOneBand is the biggest band and largest interactive recording project ever. 100% of all record royalties and all profit from merchandise goes to Support Act, the Australian music charity assisting musicians, road crew and anyone that has worked professionally in music (and yes, you can still join the band, just head to Website and join, it’s free!)