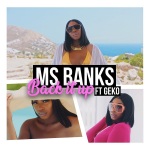 Song Title: Back It Up

Ms Banks teams up with Geko to drop a striking video for the song entitled ‘Back It Up.’

Delivery of words is one of a kind.

The sharpness of the pictures enhances the quality of the video while the lighting is outstanding.

‘Back It Up’ features a blend of a female vocal and a male vocal with a bouncy beat.

The hook of the song is memorable.

The world of hip-hop tells women that they should make themselves smaller to survive – That to reach the game’s top tier; they have to discredit every other girl running alongside them.

A razor-sharp rhymer who focuses on her own work first, rapper Ms Banks doesn’t believe in that bull****. The cocky alter ego of a 24-year-old South Londoner, she’s made it her M.O. to sidestep unnecessary drama. Instead, her penchant for wordplay and earworm melodies has made her a jewel in the crown of contemporary British hip-hop.